On 8 July, the Interdisciplinary Unit for African Studies of the Center for the Promotion of Interdisciplinary Education and Research (C-PiER) hosted its second meeting for women students from Africa, as an opportunity to meet with KU students and faculty who have ever lived or studied in Africa.

The first meeting was held October 2016 thanks to the increasing number of women students coming from Africa to study at KU.

This year’s meeting started with welcoming remarks from Dr Kayo Inaba, executive vice-president for gender equality, international affairs, and public relations, followed by an amicable conversation among participants over lunch.

In the latter half of the event, five students who entered KU this year introduced themselves and made presentations on their ongoing studies and their activities in Africa. Ms Azeb Girmai, of the Graduate School of Asian and African Area Studies, presented on NGO initiatives to promote recycling of waste in urban areas in her home country of Ethiopia. Ms Yasuko Yamahira, of the Graduate School of Management (GSM-KU), who engaged in an NGO project to empower women through training of high-level cloth fabrication skills, presented on the project with photos of the dresses made from donated kimonos.

The two-hour meeting wrapped up with closing remarks from Ms Yukari Mitsuhashi, vice-director of the International Strategy Office, stating, “We are looking forward to having the third meeting next year.” 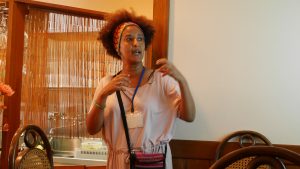 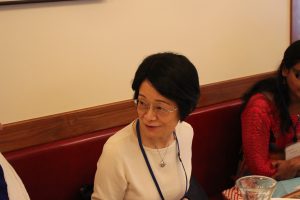 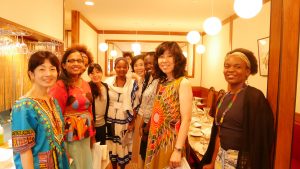