In Ethiopia, numerous rural communities remain inaccessible because of ill-maintained roads. A major contributing factor is the viscous soil covering wide parts of the African continent. The soil becomes muddy during the rainy season and swells in the dry season, frequently subjecting the roads to substantial damage, rendering them impassable. Such “road disasters” can significantly hinder socioeconomic activities, and are estimated to cost the world tens of billions of dollars in annual damage, more than the amount associated with natural disasters.

With the goal of mitigating these problems in Ethiopia, KyotoU’s Graduate School of Engineering has launched a project to develop soil-stabilizing additives from local plants, and to establish disaster countermeasures based on them for rural communities. The undertaking, entitled “Development of Plant-derived Soil Stabilizing Additives to Problematic Soil as a Means to Mitigate Road Disasters”, is one of the Science and Technology Research Partnership for Sustainable Development (SATREPS) programs supported by the Japan International Cooperation Agency (JICA) and the Japan Science and Technology Agency (JST). It is also an international collaborative effort, involving the KyotoU Center for African Area Studies (CAAS), the University of Miyazaki, Ehime University, and the Nagoya Institute of Technology on the Japanese side; and Addis Ababa Science and Technology University (AASTU), Jinka University, and the Ethiopian Road Authority on the Ethiopian side. The project period is five years starting in 2019.

The principal investigator is the Graduate School of Engineering’s Professor Makoto Kimura, who has recently visited Ethiopia to inspect candidate project sites and to conclude a research cooperation agreement with AASTU. Earlier he had worked with the University of Miyazaki’s Associate Professor Yoshinori Fukubayashi to promote a sandbag-based road restoration method in numerous developing countries. In partnership with AASTU researchers, they have already implemented a pilot project in Ethiopia to restore roads using this technique.

The SATREPS road-disaster mitigation project will target rural communities in Southern Nations, Nationalities, and People’s Region (SNNPR), one of the least developed parts of the country. The first goal is to develop cellulosic soil-stabilizing additives from locally available plants. In the next step, CAAS’ Professor Masayoshi Shigeta and Associate Professor Morie Kaneko, who have spent many years conducting research in SNNPR, will join the team to build a farm road using the newly developed soil stabilizers, in a collaborative project with the local government and community.

The signing ceremony for the research cooperation agreement took place 6 September at AASTU, with President Nurelegne Tefera of AASTU and President Gebre Yntiso Deko of Jinka University in attendance. Both presidents emphasized the significance of their relatively new institutions participating in a SATREPS project. They also expressed hope that their universities will benefit from the undertaking in terms of human capital development and skill acquisition. Professor Kimura responded by saying, “Our success depends not on PDCA (plan, design, check, and action), which is generally considered key in an international development project, but on QMPI — question, mission, passion, and innovation”, and explaining that a shared sense of mission and passion is critical to making innovations happen toward the solution of challenging issues. 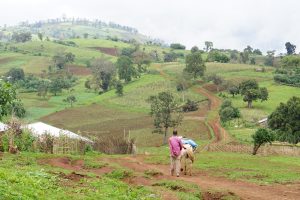 A SNNPR farming community, a candidate site for the research project